Let the entrepreneur in you RISE. Have an idea or a passion you need help turning into a business? Join one of our free Information Sessions - in English or Spanish - and learn more about our online Community Business Academy. X
Rising Tide Capital

On Thursday, May 4, 2017, Rising Tide Capital’s Alfa Demmellash sat down with entrepreneur La Shonda Tyree, in conversation about “The Entrepreneurial Mindset.” We wanted to close out Small Business Week with a celebration of the disposition that keeps our entrepreneurs (and all entrepreneurs) coming back for more late nights, more stress, and more flexibility and ownership. What makes these individuals so resilient? How will they possibly be affected as the world continues to digitalize, automate and globalize?

During the Facebook-streamed conversation from La Shonda’s soap-making studio, three points of the conversation stood out more than any others, in my opinion — all of which involve the shifting landscape of the labor market towards automation.

1. Our increasingly automated lifestyle
Although the story of people losing their jobs to machines has been around for hundreds of years, many people have been insulated from the fear of job loss precipitated by technological advances. This disconnection is simply because, until recently, it was inconceivable for these tasks to be completed by a non-human.

When La Shonda pointed out how automation is creeping into our lives, and becoming commonplace, possibly without our realization, I was fascinated. The future of Amazon’s drone delivery and fully-autonomous cars are obvious examples, but perhaps less obvious is how an activity as central to everyday life as driving; auto-braking, auto-steering and parallel parking-automation are all great examples of how automation is already starting to pop into the mainstream.

2. Entrepreneurship as a mindset

At one point in the conversation, Alfa asked La Shonda what she believed was the difference between being a business owner and being an entrepreneur.

La Shonda answered by stating that being an entrepreneur is all about constant testing, and correcting in order to make sure that what is being sold is what the customer actually wants. In other words, being an entrepreneur, rather than just a business owner, is all about problem solving. As La Shonda recounted, after operating for the first six months as a full-time business owner to mild success, she found that running a business was a lot more taxing than she had anticipated. Although she was making money, all of it was going right back into the company, which began to weigh on her.

La Shonda realized that she was trying to be everything to everyone.

“Which is something you cannot do,” she laughed. After reaching a point of exhaustion brought on by spreading herself too thin, La Shonda decided to pivot her business. Generating profit from soap making as a product is much more difficult than profit stemming from soap making as a service, she hypothesized… With this idea, she began a grand experiment, which led to her current iteration of her company: she began teaching soap making to others, allowing her and her business to grow.

In the coming months, La Shonda plans on experimenting with online webinars for her soap making classes in order to inexpensively scale her business beyond the immediate geographic confines of her Kearney, NJ workspace.

3. Entrepreneurship as community-building and peer-support mechanism

In the conversation, Alfa and La Shonda also explored the notion of entrepreneurship as a community-building exercise to protect against the “depersonalization” and perhaps dehumanizing aspects of the digital revolution.

“Particularly in countries like the U.S. where we have very developed economies, the impact of automation could be very destabilizing for existing labor markets,” said Alfa during the chat. She elaborated that people need to begin to consider what the roles of the “entrepreneurial mindset” and collaboration are as a reaction to these concerns.

“We do see [entrepreneurs] as the front line of response to the shifting landscape economically, and [a way in which] we can still continue to stabilize local economies.” Alfa continued, “To have jobs, or prospects of jobs may look entirely different [in the coming years]. In this case, we may entirely redefine what it means to have work, or what it means to have a job.”

Alfa noted that at some point in time, jobs very well may be solely a source of self-actualization, and noted that entrepreneurs have already discovered its positive effects on communities and human interaction.

“I see creativity here — I see wellbeing, because I think that a lot of what is anxiety producing about the coming age of automation or the digital revolution that’s upon us is that people are so disconnected. There are phenomenal technological innovations out there [where you could conceivably spend all your time alone in a virtual and digital reality,] or you could be in here making soaps, or learning new skills and having conversations about what matters to you. You can talk about if you’ve been diagnosed with something… You can talk about how you’re saving to send your child to school. Or maybe [you could] get new ideas about a vacation that you might want to take.”

For these reasons, Alfa and La Shonda agreed that entrepreneurs need to further collaborate, meet and engage their communities as a “front-line defense” against potential dehumanization caused by our ever-increasing shift towards convenience.

As the two women pivoted to close out the session, Alfa noted that entrepreneurs and their businesses are nimble enough to make the changes needed to work on the problems that we are seeing. Large companies, she argued, are accountable to shareholders, which limits their ability to be flexible, nimble, and lean enough, to make immediate and precise changes on the micro-economic level to transitively affect the macro-environment.

Join us in June for the next episode of The Entrepreneurial Mindset. 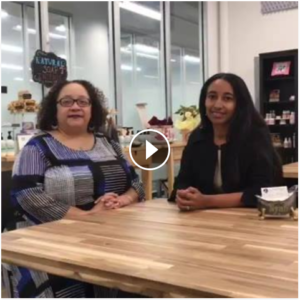 GET THE RISING TIDE CAPITAL NEWSLETTER

Close
WANT MORE BUSINESS TIPS LIKE THIS IN YOUR INBOX EVERY MONTH?